A Day of Launches

Yes, that's what today was - a day of launches! No, I'm not talking about boring launches like rockets or nuclear warheads. I'm talking about the exciting stuff - books and catalogues!

The State Library of Queensland has launched "Books From Our Backyard" (refer to my previous post if you haven't, tut-tut, done so already) amidst waves of complimentary wine (thus my more colourful than usual blogspeak) and choruses of eloquent speeches. We, the authors of Queensland, are told that 4000 copies of the catalogue will bring news of literary delights to the far corners of the sunshine state (even Toowoomba!) and will be available in all public libraries, bookshops and brothels. But seriously, thanks to the SLQ and the QWC for this wonderful initiative.

The other launch was that of Zero Plus Seven, the second anthology from the Short Fiction Writers' Guild. Here's the official description:


Speculative fiction served buffet style. Ranging from fantasy to horror, this anthology has it all. From the founders and members of the Short Fiction Writers' Guild (SFWG), an organization dedicated to the celebration of all genres of short fiction, comes their second anthology, ZERO PLUS SEVEN.

Horror from Aaron C. Engler: EVENT ZERO
Event Zero is a short document from the government archives detailing the first zombie event. It is thought to be the earliest accounts of the events in June of 2016.

Epic Fantasy from Jason Varrone: KNIGHT'S OATH
Danthane has spent decades in service to his kingdom as commander of the army. When the newly crowned king orders the invasion of a peaceful kingdom, Danthane's loyalty clashes with his long-held oath. Soon, he will have to decide which is more important: loyalty or honor and his life.

Historical Paranormal from Anne Fraiser: WOMAN IN A BLACK VEIL
It's 1789 London and a handsome undertaker meets the woman of his dreams. One problem: she's dead.

Science Fiction Horror from Alain Gomez: CELEBRITY SPACE
Set in the not too distant future, Dan Cooper hopes that his new job at the spaceport will allow him to get his life back on track. While taking passengers to the space hotel Moonwalk, a collision with an unknown object threatens to bring his dreams...and possibly his life...to a screeching halt.

Adventure from Randy Mixter: THE ROCKING CHAIR LADY
Based on a young boy's fascination with an elderly lady's stories of her adventurous, and sometimes magical, life.

Science Fiction Mystery from Robert Collins: MISS MARK
Jake Bonner is approached by a young actress who's being harassed by a rival young star. Can Jake use his savvy and his cool ship to stop the rival, and maybe hand out a little comeuppance to boot?

A Haunting Tale from Cameron Trost: THE HOUSE OF SHATTERED LIVES
When the auction at Riverbend House is interrupted by a strange old lady who warns that evil forces roam unchained within its walls, all but a handful of interested parties return to their cars and drive away. Vincent and Liz Westfield find themselves presented with an opportunity to buy the property at a much lower price than they had expected. They are not swayed by the rumors. Their rational minds have no room for superstitious tales of ghosts and curses...but the house of shattered lives will soon change that.

Horror from C.C. Kelly: SYNDICATION
Doctor Maxwell is about to deliver the first human clone on live national television. The hospital is happy, the network and producers are happy, the human cloning research laboratories that have sprung up are happy, the stock market is happy and the consortium that funded the Project is ecstatic. Amidst the theatrics of reality television and marketing, Dr. Maxwell reexamines the project, the corruption and the greed that allowed it. The only thing that Dr. Maxwell is certain of is that he is terrified. 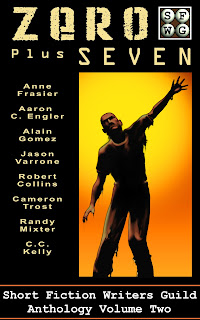