A horde of frenzied genre writers has descended upon the State Library of Queensland for GenreCon 2013. Romance, fantasy, sci-fi, horror, mystery and suspense... word weavers of all genres have been getting along splendidly. I've been hanging out with fellow AHWA members Greg Chapman, Marty Young, Stacey Larner, Gary Kemble and Helen Stubbs as well as several writers of other genres. After all, that's what GenreCon is all about - mixing it up.

This morning's presentations on The Power of Genre Fiction reaffirmed what I've always felt, that storytelling under the banner of genrefiction (as opposed to non-genre/mainstream/literary... whatever you want to label it) is the greatest way to make an impact on a broad range of readers. The presenters, Anne Gracie, Kathryn Fox and John Birmingham told us just what genre means to them and how they feel a real sense of fellowship in genre communities.

After that, I participated in the White Gloves Crime Tour and was given rare access to historic copies of intriguing tales which included The Mystery of a Hansom Cab and Robbery Under Arms. Joan Bruce of the SLQ kindly requested a copy of my short story collection for Queensland Memory, an archive of works published in the sunshine state. I also spoke to Ellen Forsyth of the SLNSW and she expressed interest in having AHWA writers participate in community discussions and presentations in NSW libraries.

The afternoon was equally informative with a discussion panel on networking that featured Kate Eltham, Sharon Johnston and Joel Naoum. The conversation focused on the importance of networking and which techniques for getting in touch with industry bigwigs were appropriate and which were best avoided by civilised human beings. This was followed by a panel on time management (the juggling act) in which Gracie McGregor, Lisa L. Hannett and Chuck Wendig amused the audience with their tales of terrible toddlers and the day job getting in the way of writing.

To top it all off, Dark Fiction Drinks was a great success. A handful of us descended on Archive Beer Boutique to chat about all things mysterious and horrific. Members of the AHWA were joined by the illustrious Robert Hood and Cat Sparks, and Marty Young signed and sold a few pre-release copies of Black Beacon Books' debut publication, 809 Jacob Street.

All in all, a great day... and the conference is not over yet, there's still one more day to go! 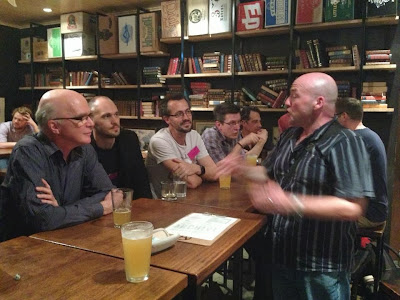