Into the Woods: An Anthology of Sylvan Stories

"Forgotten Falls", a sylvan story about a German metaphysicist on a personal journey to a haunted waterfall in remote Australia, is out now in "Into the Woods". It joins a host of atmospheric tales set in forests from the likes of Ramsey Campbell and Tracy Fahey. Hannah Kate, the editor, has kindly answered a few questions about the anthology, forests, and her publishing project, Hic Dragones.

1. The title of the anthology, Into the Woods, is very evocative. What inspired you to choose this theme?

A lot of our favourite fiction has a distinctive sense of place – from Stephen King’s New England to Agatha Christie’s country houses – and so we do tend towards publishing stories that have a strong connection to particular spaces (real and fictional). The novels we’ve published all have this – with the seaside (Blood and Water), the city (Aimee and the Bear and Psychic Spiders!) and the forest (The Tattooed Wolf) – and our anthologies also tend to have this focus. A lot of the stories in Hauntings focused on uncanny and unsettling inside spaces, so it made sense that our next collection would be outside. The woods were an obvious choice, because there are just so many different types of forests and woodlands, and they evoke so many different types of response.

2. Do you have a favourite forest, and what draws you to it?

I have a soft spot for those ‘forests’ that are called ‘semi-natural woodland’ in the UK. These are patches of woodland that have mostly grown up naturally – often on the site of ancient forests – but which may only be a few hundred years old and may be the result of replanting. As a child, I lived near Inglewood Forest in Cumbria and then next to Blackley Forest in Manchester, so these are the sorts of woods that I’m used to. What fascinates me about these woodlands is the way the history of trees interweaves with the history of people. Trees are felled and houses built, but then houses are demolished and a forest is planted. I think people often overlook this complex history, because they assume that a forest is either ancient woodland or a new cultivation, and that once a forest is cut down that’s the end of the story. I like the places in between, the places that aren’t ancient but aren’t new either. My story in Into the Woods takes place in urban woodland spaces – those places where the trees came back. Officially, these woodlands are created and maintained by people… but maybe the forest also finds its own ways to exert control?

My current favourite examples of urban woodland spaces are all in North Manchester: Bowker Bank Woods (in Crumpsall), Baileys Wood (in Blackley) and Boggart Hole Clough (also in Blackley).

3. Forests have always had a deep-rooted effect on the human psyche, whether as places of refuge or of danger. Why do you think this is? Has this changed over time as the world’s forests dwindle?

I think our fascination with forests goes hand-in-hand with our project of deforestation, to be honest. In Britain, ancient forests began to be systematically cut down during the Anglo-Saxon period (it’s not a new phenomenon!), but a kind of folk memory of the forest has persisted. For instance, despite the fact that it hasn’t been true for over a millennium (if, indeed, it was ever true), it’s still reasonably well-known that once upon a time you could cross the entire country without ever touching the ground. On the one hand, I think there’s a nostalgia about the forest – it’s part of the ancient landscape, and so it’s a romantic and imaginative place. On the other hand, there’s a sort of buried guilt about its destruction – it’s something natural and powerful that was destroyed (is still being destroyed) by the relentless march of human progress. In a way, it’s a bit like our relationship with certain wild animals, like wolves (in the UK particularly). We don’t have to live in the forest with the wolves anymore, so we’re free to idealise and romanticise them – but we also know it was us that killed the wolves and uprooted the trees, and there’s always the fear of being somehow held to account one day.

4. What are your aims for Hic Dragones?

Hic Dragones is a micropress with ambitions of becoming a small press – we’re not after global domination just yet! At the moment, we’re focusing on publishing a small number of new books each year, and on publishing our new editions of Victorian penny dreadfuls. As well as Into the Woods, we have another anthology coming out this year (Nothing) and then we’ll be opening submissions for our next project. We’re currently publishing instalments of our edition of George Reynolds’s Faust – an early Victorian penny dreadful about the man who sold his soul to the devil. We’re really pleased to be able to publish Faust, as this is the first modern edition of Reynolds’s serial, and we’ve been able to include the original illustrations as well. Once Faust comes to the end of its run, we’re going to be announcing the publication dates for Spring Heel’d Jack. In a nutshell, I guess our aims are pretty simple: we just want to keep publishing stories that we like and encouraging people to read them!

5. You chose to include my story, Forgotten Falls, in the anthology. Thanks, by the way. What was it that appealed to you?

For me, the story’s appeal lay in the way that all-important sense of place was combined with a sense of character. Without any heavy-handed exposition, we get to know the protagonist Schenker and the things that have brought him to where he is at the start of the story – but Schenker’s history (and his future) are completely bound up with the forest in which he finds himself. He believes he is completely in control of his surroundings – in fact, he’s so busy thinking about people that he barely gives the forest itself a second though – but is he really in control?

Another thing I liked about the story was the type of forest that you chose. As I said, there are so many different types of woods and forests, so we were keen to reflect this in the stories we chose. ‘Forgotten Falls’ takes us to a subtropical rainforest, a place that’s very different from the ancient forests, urban woodlands and patches of wilderness found in other stories in the collection. One of the real pleasures of putting together Into the Woods came from seeing the ways in which writers evoked such an interesting array of settings.

The book is available in paperback and eBook from our website and from all good online retailers, including Amazon. For readers in the UK, the paperback edition can also be ordered by local bookshops and libraries.

Bio: Hannah Kate is an editor and writer based in North Manchester. She is the founder and editor-in-chief at Hic Dragones, and has had stories and poetry published in a number of anthologies and magazines. She also presents a weekly literature show on North Manchester FM, imaginatively entitled Hannah’s Bookshelf, and she is currently the treasurer of the Friends of Crumpsall Park. 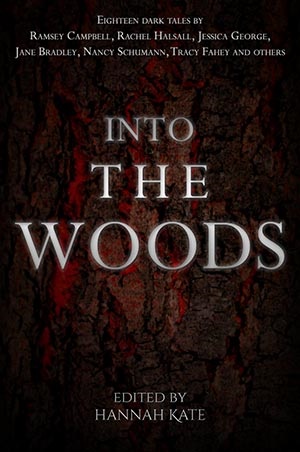